Investigators also seized $1,685 in cash, drug packaging, and other evidence of drug sales. 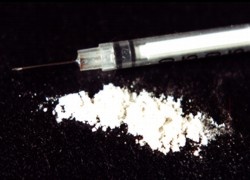 DULUTH, Minn.- A 33-year-old and 29-year-old, both from Duluth, were arrested in a home in Central Hillside by Duluth Police Officers and the Lake Superior Drug and Violent Crime Task Force (LSDVCTF), as part of an ongoing drug investigation.

According to a spokesperson with the Duluth Police Department, around 1:42 p.m. Friday, the Task Force executed a search warrant of a home in the 400 block of E 6th St. The home was part of an ongoing drug investigation.

Duluth Police Officers conducted a traffic stop near the home, arresting the 33-year-old Duluth man who had probable cause. He was booked into St. Louis County Jail pending charges of 1st Degree Drug Sale.

With the help of K9 Vili, 52 grams of hidden heroin/fentanyl were also located and seized.

According to the Department spokesperson, If you or a loved one is looking for recovery support services, reach out to the Duluth Police Department’s Substance Response Team at (218)-730-4009.