The team members performing an on-the-ground test Sunday to find out just how powerful their engine is right now. Data gathered from the test will help the team optimize their rocket launch to hopefully reach 30,000 feet above ground for the big competition in New Mexico in June. 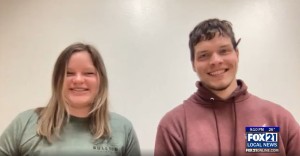 The rockets aren’t small, either.  They’re eight to 20 feet long.

“We are all just incredibly excited to go and see all of the other rockets and really show what Bulldog Rocketry really is capable of,” said Emma Nelson, a team member of Bulldog Rocketry.

Meanwhile, for team member Max Benson, the work he’s doing now with this rocket will only help his goals in the future after college.

“I absolutely do want to be a rocket scientist. I’m just interested in the aerospace and defense industries, particularly. So a lot of what we’re doing right now really works out with what I’m interesting in. Kind of looking at flight characteristics and how a rocket is moving through the air,” Benson said.

The Bulldog Rocketry took second place in its division in 2019. They haven’t competed since then because of COVID.

And by the way, the reason for the on-the-ground test is because there are few places in Minnesota that allow a rocket to launch 30,000 feet in the air.