The legislation invests $20 million into grants to find new methods of prevention, treatment, and cures for ALS.

ST. PAUL, Minn.- The State of Minnesota has officially dedicated millions of dollars to ALS research — and front and center, showing firsthand the tough battle with the disease, was Minnesota Senator David Tomassoni.

Tomassoni joined Governor Tim Walz and other state lawmakers in signing the $25 million dollar bill into law this week. “It’s law,” the Governor said after signing, to applause from the room.

The Senator, who announced his diagnosis last summer, praised the bill. “But imagine a researcher like Dr. David Walk finally having the research dollars necessary to make an unprecedented effort towards finding the cure.”

The legislation invests $20 million into grants to find new methods of prevention, treatment, and cures for ALS.

“The bill doesn’t stop there,” Sen. Tomassoni said. “Caregivers get some badly needed support Also as being a caregiver is a 24-hour job.” 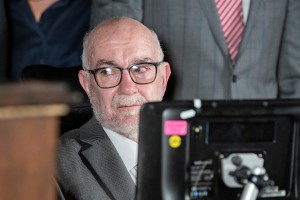 The remaining $5 million will go to caregiver support programs for families of people with ALS, including services, information, education, and training for caregivers and volunteers caring for, managing, and coping with care.

This was seen in Senator Tomassoni, emotionally speaking at the signing through voice automation.

“I have to thank my sons Dante, Danny, their spouses, Tiffany, Anna, my sister Mary Jo and her husband Richard all have become my hands, my voice, basically my means of communication and mobility,” said the Senator.

“The ultimate thank you is to my legislative colleagues. This is about making the future better. We can all be proud of that,” he said. “This is truly a good day.”

Made out of taconite, it recognizes him for his contributions to the mining industry in his time in office since 1993. 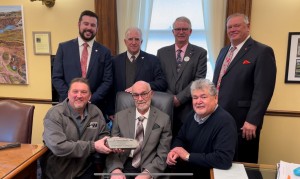 Senator Tomassoni, a Chisholm native, announced last month that he would retire at the end of 2022.