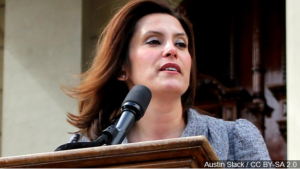 GRAND RAPIDS, Mich. (AP) – Jurors are hearing closing arguments in the trial of four men accused of plotting to kidnap Michigan Gov. Gretchen Whitmer. A prosecutor says the men were “filled with rage” against government and Whitmer’s COVID-19 restrictions in 2020.

But a defense lawyer says there was no plot, and that the men were under the influence of undercover FBI agents and a key informant.