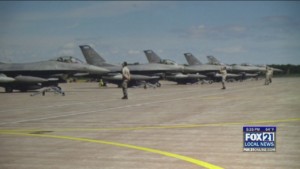 The legislation is right now going through committees in the Senate and House.

The proposal would demolish the 148th’s aging hangars to make way for new hangars that can house different types of aircraft like the F-35s, which will eventually replace the military’s F-16s currently based at the 148th.

“We’re going to put $25 million into this base that means a whole lot to our community — that’s going to be a big deal for those federal decision makers in Washington, D.C. to say, yeah, maybe we should put some investment into Duluth. Maybe they should get the F-35. I think it’s a really interesting opportunity where there’s a state surplus. We’re not talking about raising peoples taxes to do this. Let’s do what we can to secure the long-term future of the 148th here in Duluth,” Forsman said.

The 148th is the city of Duluth’s eighth largest employer with 1,100 jobs.