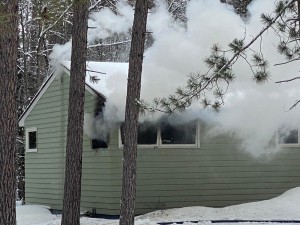 Photo: Friends of the Northland FireWire

BRITT, Minn.- A homeowner has been arrested by St. Louis County Sheriff’s Deputies Friday on arson-related charges after a fire at his home in Britt.

According to deputies, around 12:14 p.m. St. Louis County Sheriff’s Deputies responded to a house fire in the 8600 block of Donnywood Circle W. A neighbor reported flames coming out of the window.

While responding deputies came across a 51-year-old man walking on a nearby roadway and discovered it was the owner of the burning house.

According to investigators, the homeowner “made utterances” to the deputies about the house fire, which lead them to arrest him for arson-related charges.

Several area Fire Departments responded and were able to knock down the fire and limit the damage to the home only.

No one was injured, however, 3 cats died inside.

The St. Louis Co. Sheriff’s Office and Minnesota State Fire Marshal’s Office are investigating the cause of the fire.

The homeowner was lodged at the St. Louis County Jail in Virginia pending formal charges by the County Attorney’s Office.