BAYFIELD, Wis.- 6 families have been displaced by a fire that destroyed an apartment building in downtown Bayfield Saturday, which burned into the night.

According to Bayfield Fire Chief Jeff Boutin, the fire started around 12:30 at the building on Mannypenny Avenue & South Broad Street. 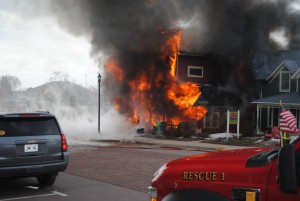 Witnesses nearby said part of the wall collapsed, damaging a neighboring business.

“It’s adjacent to another structure that caught on fire that we managed to save so we are proceeding to knock the rest of the remaining building down so we don’t lose the second structure,” the Chief told FOX 21 over the phone during mop-up efforts.

The Wisconsin Department of Transportation closed all north and southbound lanes on WIS 13 from Rittenhouse Ave to Manypenny Ave due to the fire.

No one was injured, as the 6 families were not home at the time, however, the Chief says some cats were lost in the flames.

Thick plumes of smoke blew across the downtown area. Crews battled the fire into the early evening due to the windy weather.

“The winds were, 15-20 mph out of the east so wind hampered our firefighting efforts,” Chief Boutin said.

According to another Bayfield resident, that fire was finally out later in the evening with firefighters just getting home around 9 p.m. 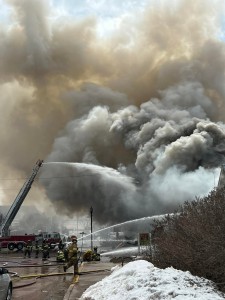 Bayfield Inn gave them a place to stay the next 2 nights, while Windseeker Rentals also provided additional nights of lodging.