Decontamination Trailer Donated to Superior Fire Department, Will be Used Across Northwest Wisconsin

SUPERIOR, Wis. – A new piece of equipment will help firefighters in Superior get clean faster and easier when they are out on certain calls.

Enbridge has donated a $400,000 53-foot decontamination trailer to the city.  Jeff Foster Trucking is also assisting by storing the trailer at their location, and having people available to move it to a scene when needed.

Fire Chief Scott Gordon says the trailer won’t be used for every call they are on, but ones where hazardous materials could be present.  That would have included the Husky Refinery explosion back on April 26, 2018.

“If we get a truck spill,” says Gordon.  “If we get a trail derailment.  We can come up with scenario after scenario where other businesses other than Enbridge are going to benefit from the City of Superior having this.  And essentially it costs the taxpayers nothing, but allows us to protect the taxpayers 24 hours a day, seven days a week.” 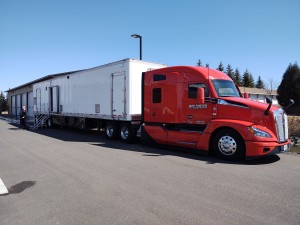 The decontamination trailer donated by Enbridge to the City of Superior. Image: Rusty Mehlberg

Gordon adds the trailer has showers and separate chambers that can have its heat and pressure changed to help emergency responders get clean from the materials they are dealing with at a scene.  “Every time that we go on an incident where a chemical is involved, we use different ways to determine what and how we should decontaminate ourselves and our equipment.  We’re doing that at different places at different times.  This trailer allows us to do this at one location at one time.

“In the past, we’ve handled decontamination in different ways. If it’s hot, it’s miserable because you have to try to make the space cold.  If it’s cold, which a lot of time it is, decontaminating people is a challenge when it is below freezing outside, not to mention 10 to 20-below.  This trailer allows us to control that environment.  It’s going to make it so much better and so much safer for them to do their jobs.”

The trailer will also be used with Ashland Fire when the two units respond together as part of the Hazardous Materials Response Team, which covers seven counties in northwest Wisconsin.