The film was shot mostly in Duluth’s Lester Park and at the Androy Hotel in Superior.  It’s described as “raw, unedited footage recovered from the iPhone of a YouTuber who went missing while filming in a mysterious forest. Beyond the North Woods is a Duluth, MN based found-footage horror experience.” 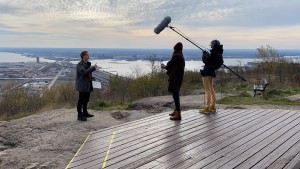 The film will be shown at 5 p.m. May 1 at the North by North International Film Festival, which is taking place April 27 through May 1 at Zeitgeist in Duluth.  For ticket information click here.