Authorities were looking for Michael Johnson, 38, of Chisholm, who had multiple felony charges out of Morrison County. 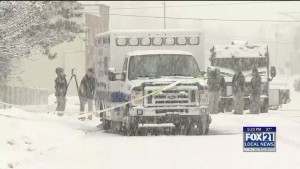 CHISHOLM, Minn.- The man killed in Chisholm and the officers who allegedly shot him have been identified by the Minnesota Bureau of Criminal Apprehension.

According to a spokesperson with the BCA, authorities were looking for Michael Johnson, 38, of Chisholm, who had multiple felony charges out of Morrison County.

A deputy located his car outside the home on Central Avenue South in Chisholm Friday.

Later several departments responded and tried to arrest him.

At one point, according to the spokesperson, Johnson came out of the house with knives in his hands, two of which were found near his body.

All are on standard administrative leave, according to the BCA.

The BCA continues its investigation, before presenting its findings to the St. Louis County Attorney’s Office.