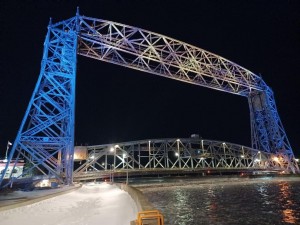 DULUTH, Minn. – Duluth Mayor Emily Larson told FOX 21’s Dan Hanger on Friday that she’ll be releasing her updated lighting policy sometime next week after getting heavy scrutiny from the public two months ago over the previous policy that did not accept any special requests to light the iconic Lift Bridge different colors for special occasions and causes.

The controversy unfolded when Larson said she was not lighting the Lift Bridge yellow and blue to support Ukraine and was instead only lighting the less-visible Enger Tower.

Larson ultimately had a change of heart days later on March 1 after getting a lot of feedback. But she said no further requests would be granted, and a new lighting policy would be unveiled to the public in 60 days for the Lift Bridge and Enger.

It was about two years ago when a $155,000 multi-colored LED lighting system was installed on the bridge. It was soon after that when Larson started denying all lighting requests and wouldn’t light the bridge for holidays because staff was inundated with requests — some of which were “subjective in nature.”

A specific date to release the new policy was not given Friday by Larson, other than saying she was making final edits before its release the first week of May.