Grief and laughter were brought out in the Marshall School Auditorium Sunday.

DULUTH, Minn.- Hundreds from the Duluth area and beyond joined relatives of the Barry Family at their Funeral Sunday as they shared their memories, paid their respects, and said farewell to Sean, Riana, Shiway, and Sadie.

“I’d just like to thank everybody. The last 10 days, have been hard,” said Sean’s younger brother, Brian, holding back tears.

The two parents, their two daughters, and dog were killed in their sleep in their Hillside home last week, by the family’s 29-year-old nephew and cousin, Brandon Taylor Cole-Skogstad, before he took his own life.

The memories of Sean and Riana, and their daughters, Sadie and Shiway Barry, were shared with heavy grief, but some, like moments shared by Sean’s brother Tim, also brought out laughter in the Marshall School Auditorium.

“The thing that I will miss the most is how he always tried to sell me to move to a cold and miserable place,” Tim Barry said. “Like I said, his base of operation’s Alaska, and then after 20 years he decided, ‘you know, this isn’t cold enough I’m moving to Minnesota’.” 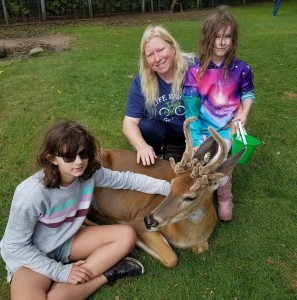 A good friend of the family named Dominic Hondelero described being roommates with the couple in a small 10 by 16 ft. cabin in Alaska. “I lived in the sauna. Or as I prefer to refer to it, the detached guest house.”

But of course, as the memories came flooding back, so did the hole the Barry’s left behind.

“It was a small cabin, but they never made me feel like I wasn’t welcome,” Hondelero said through tears.

“This is a family who truly lived every single day,” said Betty Barry, Sean’s Mother.

According to Betty, her son was an uncontrollable ball of energy through adolescence — who literally settled down right when he met his wife.

“Like, he was bouncing around from one thing to the other, one job one continent, one major, and then some wonderful thing happened and he met a wonderful woman named Riana and I assure you I was grateful, very grateful,” she said.

One of Riana’s big contributions to the community was through the local Girl Scout troop — 4 years of which she spent as the “cookie mom.”

“It meant that for her entire troop it was very large I think there were about 20 girls in her troop she was in charge of all the inventory making sure all girls had the number of cookies they wanted,” said Leigh Ann Davis, CEO of Girl Scouts Lakes and Pines.

So what better way to honor her and her daughters, the family thought, than inviting the Girl Scouts.

They gave away free boxes of cookies, outside the auditorium, adorned with a picture of Rianna and the girls.

“I’ve had the opportunity to talk to a lot of the young girls who are over here giving out cookies to everybody and for many of them I’ve heard the words ‘Shiway and Sadie were like my sister,’ and so a lot of them are feeling like they’re losing, they lost a sister, 2 sisters today,” Davis said.

And of course, the girls were honored for their accomplishments. Sadie sold more than 1,400 packages of cookies. 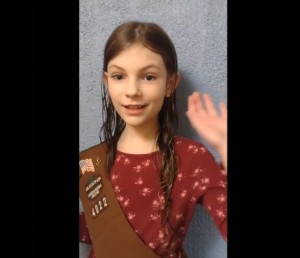 A screengrab from the video, as Sadie waves goodbye after pitching her girl scout cookies.

Her bright smiling face shone again in the auditorium, in a recent video her mom filmed of her explaining how and why people should buy a box:

Riana: “And how many boxes do you want to sell this year?”

But the reality that it was “goodbye” to a family who made themselves a part of so many lives brought the pain back again, as the full color guard accompanied the caskets to the hearse.

“For context, this was written sort of stream of consciousness on the night that I found out what had happened,” Dominic said before reading a piece he wrote:

“I’m with you Sean and it is our last late-night phone call, but we don’t know it. I remember to say I love you man and we hang up.”

“It’s late and I am crying and laughing. I am with you Sean, Riana, Shiway, and Sadie.”