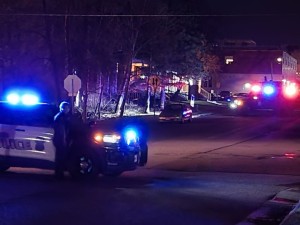 At approximately 5:54 p.m., Duluth Police Officers were dispatched to the 700 block of E 1st St for sounds of shots fired. Initial information received from the victim stated a male, later identified as 36-year-old Duluth resident Valentino Dodge, was inside the residence on the 700 block of E 1st St after having a domestic incident with his significant other that involved firing a handgun.

Based on the initial information received from the victim and dispatch, Duluth Police Officers, the Tactical Response Team, and the Crisis Negotiations Team set up a perimeter and evacuated surrounding apartments as a precautionary measure.

After further investigation, a search warrant, and multiple attempts to contact Dodge, it was confirmed he wasn’t inside the residence. It is believed he left prior to our arrival. While negotiating with Dodge by phone he agreed to meet officers in the 1200 block of W Michigan St.

At approximately 12:15 a.m., Monday, May 9, Duluth Police Officers detained Dodge without incident in the 1200 block of W Michigan St. Dodge was transported to the Public Safety Building to be interviewed where he acknowledged his involvement in the shooting.

The Duluth Police Department was assisted by the St. Louis County Sheriff’s Office and the Superior Police Department. We want to thank the public for giving our officers room to work so we could resolve this situation peacefully with no injuries.

The specific motive behind the shooting is yet to be determined. This is still an active investigation and no further information will be released.

DULUTH, Minn.- A 36-year-old man has been detained without incident and evacuated residents are allowed into their homes following a standoff with Duluth Police which lasted roughly 6 hours.

According to a spokesperson with the Duluth Police Department, at about 12:15 a.m. Monday officers detained the Duluth resident “without incident” from an apartment complex on the 700 block of East First Street.

The call came in just before 6 p.m. on Sunday. Shortly after, the Tactical Response Team arrived and attempted to communicate with the man.

Around 8:30 residents living nearby were evacuated. Around 10:30, the Tactical Response Team and Crisis Negotiations breached the apartment and used “less than lethal tactics” while negotiating.

Reporters on scene saw authorities assisted by the Superior Police Department and their bearcat vehicle, breaking down windows and other parts of the structure. They were seen using the intercom to try and communicate with the man inside.

The investigation is active and ongoing, the spokesperson said, more information will come later Monday.

DULUTH, Minn. — Duluth police are asking the public to stay away from the 700-block of East First Street after a report came in that shots were fired in the area.

Residents living nearby have been evacuated until its safe to return.

The call came in just before 6 p.m. on Sunday.

The DPD’s teams for tactical response and crisis negotiations are at the scene and trying to talk to the male individual, and are working to try to bring him into custody without incident.