DULUTH, Minn. – One of the most vocal organizations in support of lighting Duluth’s Lift Bridge for special causes is “disappointed” Mayor Emily Larson’s new policy still restricts that from becoming a reality after public scrutiny on her prior policy.

It was late Friday when Larson released the new policy, which will light the iconic structure for nine national holidays and days of celebration or awareness that her office has decided on, including September 11th and Indigenous People’s Day. 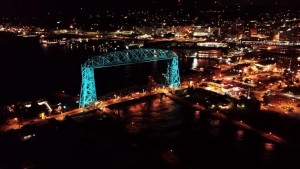 The only other lighting outside of those nine days will be under “extraordinary circumstances, such as a global humanitarian crisis” like the war in Ukraine.

All outside lighting requests will be focused on the less visible Enger Tower.

Kristine Greer, board chair of the Minnesota Ovarian Cancer Alliance, told FOX 21 on Monday that not being able to light the highly visible Lift Bridge teal for her cause is a big setback for raising awareness and saving lives.

“When I started this nine years ago, I would receive letters and emails from women saying they saw the teal bridge, they found out why teal, realized they had some symptoms, got to the doctor early enough and are alive. So to me … I can’t think of anything more important than saving lives,” Greer said.

Greer plans to approach city councilors to see if they’re willing to make changes to the mayor’s policy, much like she did years ago to get the bridge lit teal during the Don Ness administration.