While they sustained heavy damage, the spokesperson says enough infrastructure remains that they can save the bridges. 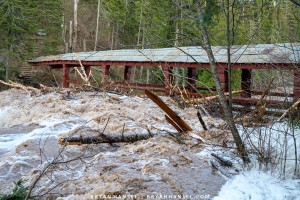 The resort asked for people to share pictures and images of the beloved bridges, which seemed to be the site of many weddings and other memories in the past decades.

According to a statement from the resort spokesperson, the bridges weren’t damaged directly by the water but rather the full-size pine and spruce trees that were swept away and barreled down the rushing river.

While they sustained heavy damage, the spokesperson says enough infrastructure remains that they can save the bridges.

The statement reads in part:

The Nelson family should be very proud at the workmanship of these long-standing bridges, there is no doubt that these bridges were well built, we’ve seen highway bridges wash out from less force; it’s a testament that these bridges are here to stay and remain a permanent part of Lutsen’s history….Lutsen is Minnesota’s first resort dating back to 1885, it’s a legacy resort full of history and we are committed to doing whatever we can to preserve that history; the red covered bridges will be saved at all costs.