City officials say the 'nuisance' is better than Lake Superior swallowing up property from chronic erosion.

DULUTH, Minn. – Some homeowners on Park Point are getting buried in fine sand and silt, and some are even losing their yards to inches of the super fine particles.

The problem is a result of the beach nourishment project from last year that built back multiple feet of beach by using dredging leftovers from the harbor.

The city calls it a necessary nuisance to a much bigger problem.

Some homeowners on the lake side from the Lift Bridge to the s-curve say they never expected as much sand and silt to blow onto their property as they’ve gotten so far.  But city officials say it was expected from the beach nourishment project, and it’s better than losing a beach and Lake Superior suffocating homes along the way. 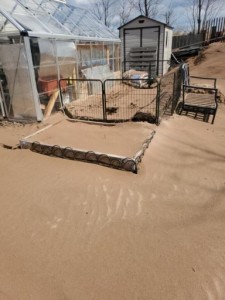 “This has to be thousands of pounds of sand. It’s more than we are just able to manually shovel,” said Park Point resident Shannon Gardner. “You’re hearing the sand hitting the windows, you know, OK, we’re getting some sand. And I think it was two or three days later we looked out and we were like, what just happened.”

The fine sand and silt is coming from just over what’s left of the Gardner’s deteriorating dune after last year’s dredging project to rebuild a beach that was almost wiped out by high lake levels and strong storms.

“I don’t think we are going to have a yard. You know, there’s not going to be grass back here. It’s just going to be sand,” said Garnder’s husband, Chris. “From my level land, from my normal foundation, we’ve got 6 to 8, in some cases 10 inches of just sand – heavy wet sand that needs to be removed.”

Neighbor Keely Youngblom has lived on the point for 42 years — 39 of that in her current house just blocks from the Lift Bridge.

“I take a lot of pride in keeping my yard looking nice, and I feel like giving up, I just feel like selling,” Youngblom said.

Youngblom says even just an inch of silt built up on her lawn is a nightmare because she can’t mow it, which only attracts more problems.

“I’ve got ants and then rodents and all kinds of things that would nest in that area,” Youngblom said.

Jim Filby Williams is the director of the city of Duluth’s Department of Public Administration. He says the beach nourishment project near the Duluth Ship Canal involved 120,000 cubic yards of material.  He acknowledges the silt blow-off is a nuisance, but says it’s better than the alternative of the lake swallowing up properties.

“We’re still working on the problem with our federal partners, but for now if we want private property protection then we have no choice but to accept this nuisance as a byproduct of that,” Filby Williams said.

“I think the chronic erosion problem, which is growing worse, is a joint product of the creation of the port entries, and the interruption of that natural delivery of new sand to rebuild the point. But also climate change is driving more frequent and severe storms and more volatile changes in lake levels, and I think the adjoining public and private uses … have to a great degree destroyed or displaced the natural barrier dunes that were formally in that location, so it’s a mix of factors,” Filby Williams said.

Hamilton Smith has lived on Park Point for 50 years. He’s the chair of the Park Point Community Club Erosion and High Water committee. Smith says properties without barriers were expected to get the blow-back from the new beach, but there is no other cost-effective solution to what he described as an urgent problem.

“I have a lot of sympathy for those people dealing with it, but compared to the alternative of the wave action reaching people’s property and doing property damage, we felt it was a very reasonable trade-off,” Smith said. “Way more beach for people to enjoy and way more protection for the residents of this area.”

Longtime Park Point homeowner Gale Kerns agrees with Smith. He saw the lake’s waves up in his yard a few years ago.

“Water would splash up here and the wave would come up and go away,” Kerns explained.

Kerns says he really doesn’t have a problem with the blowing silt because he’s got a see-through fence as a barrier.

“You do what you need to do to protect your property,” Kerns explained.

And that’s exactly what the Gardners are trying to do while accepting their new normal on a one-of-a-kind piece of land known as Park Point.

“The grass will grow through, but the problem is when I mow it, now it’s going to be creating a dust storm and that, ya know, shutting all the windows and washing them afterward,” Chris Gardner said.

“We’ve put thousands of dollars into better the yard space, now we’re going to have to spend thousands to undo it. So, it’s expensive, it’s very expensive and unexpected,” Shannon Gardner said.

As for any sort of compensation, the city says it is not responsible for anything on a homeowner’s property and homeowners are more than welcome to put up barriers as long as it’s on personal property, not the actual public beach.   Officials expect the blowing silt to continue for another two years.