DULUTH, Minn. – Steve-O is well known for his wild and crazy ride on MTV’s reality comedy series known as “Jackass” in the early 2000s followed by “Jackass” movies. 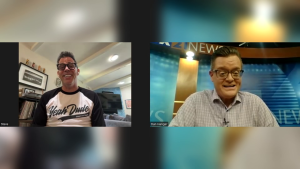 See Dan’s chat with Steve-O in Part 1 above and Part 2 below.

But since then, Steve-O has become much more with 14 years of sobriety, becoming a New York Times best-selling author, a top-rated podcaster and getting engaged.

But Steve-O told FOX 21’s Dan Hanger he’s still as sick and twisted as ever, which you can see up close and personal June 16 at the DECC for Steve-O’s Bucket List Tour.

According to promotional material, “Every idea on Steve-O’s Bucket List was so ill-advised, he never expected to go through with any of them. Until it was time to prepare for this tour. Not only are the stunts more ridiculous than what you already know Steve-O for, he did them all, and made a highly XXX-rated, multimedia comedy show out of them. Not for kids, or for the faint of heart.”

Part 2: Sobriety, longevity, and what Steve-O is up to outside the tour.