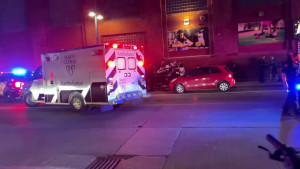 DULUTH, Minn. — The Duluth Police Department is investigating a shooting in Canal Park that injured one man.

The call for help came in around 9:30 p.m. Wednesday for a shooting outside between Green Mill and Adventure Zone on the 300 block of South Lake Avenue.

“Upon arrival, officers located an individual that sustained a gun shot wound to the lower leg,” according to Mattie Hjelseth, public information officer for the Duluth Police Department.

A customer at Green Mill provided video to FOX 21 of the scene shortly after the shooting, which shows the victim being put into an ambulance by stretcher while communicating to people he knew and holding his leg.

Investigators said the the parties involved are known to each other, and they believe they know who the suspect is.

At last report, nobody was under arrest.