Don’t Put Gas Down The Sewer, Met Council Warns After U Of M Sewer Explosion 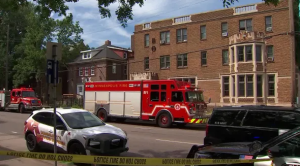 MINNEAPOLIS (FOX 9) – Don’t flush gas or other flammable materials down the toilet.

This is the message from the Metropolitan Council on Friday after sewer explosions forced evacuations at the University of Minnesota on Thursday.

The Met Council says it is monitoring conditions across the sanitary sewer system and at the Metropolitan Wastewater Treatment Plant on Friday after the explosion on campus.

“It is a stark reminder that the only thing that should go down the sewer besides human waste is toilet paper,” Met Council said in a news release. “The Metropolitan Council, and its Environmental Services division, is warning residents, businesses, and industries not to put gas or other flammable materials down the sewer.”

The Met Council’s Environmental Services team was on the scene of the U of M explosion to help assess what caused it. The Met Council says the explosion is believed to have been caused by a release of gasoline into the sanitary sewer system.

The incident remains under investigation. If anyone in the area smells gas odors, they should call 911.

Don’t put these items down the toilet

The Metropolitan Council says the following items should not be flushed or put down the drain: