“It Is A Grave Concern For Us.” Duluth Chief Reacts To Latest Teenage Gun Violence

DULUTH, Minn. – The investigation continues into Duluth’s second gun-related homicide of the year.

The shooting on July 2 killed a 17-year-old boy near the intersection of North 16th Avenue East and East 1st Street, next to Endion Park.

Duluth Police spent part of the morning of July 5 continuing their investigation around the scene, but did not provide the name of the victim or the 17-year-old arrested.

Chief Mike Tusken says it did not take long to establish the suspect and find them.  “We were able to begin negotiations, which went on for several hours, and ultimately garnered the peaceful surrender of the suspect.”

Formal charges are expected to be filed by the end of the week.

This shooting is the latest involving teenagers in the Twin Ports region over the past several weeks.

Duluth Police say they have responded to 25 calls involving shots fired and guns so far this year, based on evidence that was recovered. Seven of them have involved people under the age of 20.  They range in calls from the previous incidents mentioned, as well as an accidental discharge while cleaning a gun, a person shot in the foot when a friend was playing with a gun, and an ongoing feud where a gun was fired at a home, causing damage.

Chief Tusken says there is a rise in violent crimes going on in Duluth, just like the rest of the country.  “So this is more of a broader trend that has steered clear of Duluth until more recently, but we are seeing it.  It is a grave concern for us.”

Tusken is asking the community for assistance in several ways.  One is for parents to keep tabs on what their teenage sons and daughters are doing.  “It is important for us as parents to be really engage in what our kids are doing, who they are hanging around with, where they’re going, what’s going on in their lives, and also have that network of other parents to talk to.”

“The only way for us to ensure safety is to be able to do those meaningful interventions, interruptions, seizures of firearms before they is actually a tragedy.”

A small memorial has been set up along a tree next where the fatal shooting occurred.  Messages left on them include “He Did Not Deserve This”, “17 Is Too Young”, and “Justice Will Be Served.” 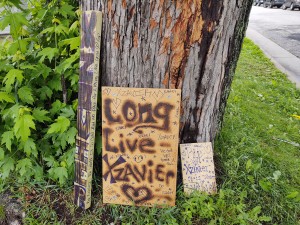 A small memorial set up near where a 17-year-old boy was shot and killed in Duluth July 2, 2022. Image: Rusty Mehlberg