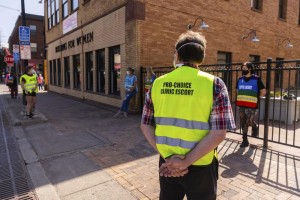 A clinic escort outside WE Health Clinic in Duluth, Minn., awaits the arrival of patients, Thursday, July 7, 2022. The clinic escorts protect patients from protesters as they approach and enter the clinic. (AP Photo/Derek Montgomery)

DULUTH, Minn. (AP) – Inside northern Minnesota’s only abortion clinic in Duluth, patients from Wisconsin and Texas sit among Minnesotans.

They are the leading edge of an expected surge of out-of-state patients following the U.S. Supreme Court’s reversal of the federal right to abortion.

Employees of the WE Health Clinic in Duluth are acutely aware of Minnesota’s status as an island of legal abortion among Upper Midwest states.

Its doctors say they are trying to accommodate as many people seeking abortions as possible and are working on how to handle an expected surge in patients.

Staff say the increased pressure began months before the Supreme Court decision, when states including Texas and Oklahoma moved to ban abortion.