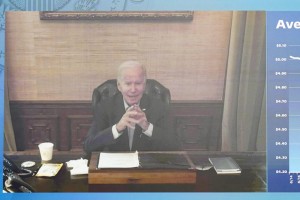 WASHINGTON (AP) — As President Joe Biden continues to recover from his coronavirus infection, the White House plans to hold a summit on Tuesday to discuss developing a new generation of vaccines that could more effectively guard against contagious variants.

The summit, which involves top administration officials, scientists and pharmaceutical executives, comes as the country faces a surge of infections from BA.5, a variant that’s an offshoot of the omicron strain.

Although the current generation of vaccines, plus antiviral drugs, have helped prevent hospitalizations and deaths, there are hopes that new versions could provide more durable protection against disruptive infections.

Biden was likely infected by the BA.5 variant, and he tested positive on Thursday. A new note from his doctor, released on Monday, said his symptoms have “almost completely resolved.”

Although he still has some nasal congestion and hoarseness, his vital signs remain “absolutely normal,” wrote Dr. Kevin O’Connor.

Biden has been taking the antiviral drug Paxlovid, and he plans to remain isolated in the White House residence.

“He continues to be very specifically conscientious to protect any of the Executive Residence, White House, Secret Service and other staff whose duties require any (albeit socially distanced) proximity to him,” O’Connor wrote.

On Monday afternoon, Biden is scheduled to deliver virtual remarks to the National Organization of Black Law Enforcement Executives conference in Orlando, Fla. He’s also expected to participate in a virtual meeting with business executives and labor leaders to discuss the Chips Act, a proposal to bolster domestic manufacturing.

Biden has held no public events since Friday, when he held another virtual meeting with economic advisers.