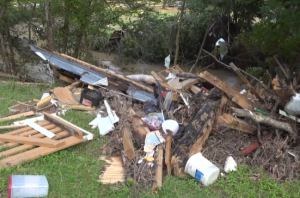 ROCHESTER, Minn. (FOX 9) – In the midst of deadly flooding in Kentucky, a group of more than 40 Minnesotans got the chance to help make a difference.

A church group from Rochester just returned from a week-long missions trip. They drove for 15 hours to a land that has been devastated by Mother Nature.

It wasn’t the trip they had initially planned, but students from Christ Community Church said they wouldn’t change a thing.

“I had never been a part of something like that before,” said Carter Goetz, who is about to start his senior year of high school.

Almost a year ago, Andrea Wageman and other leaders from the church began planning a missions trip for this summer.

“We just felt like Kentucky was the place that we were supposed to go,” said Wageman, who serves as the church’s preteen and middle school director.

At the time, they didn’t know the region would get hit with deadly flooding just a week before their vans were set to hit the road on July 31.

“They said, ‘if you’re still willing to come, we have work for you, and if you’re willing to be flexible, then we’ll shift what we had planned for you to doing flood relief,’” Wageman said.

They shifted gears to flood relief. They spent the week clearing out water and mud from a church, sorting through donations, and helping clean homes of the people who lost everything. It was the church’s first missions trip providing disaster relief.

“It was just like you’d never believe. It was just crazy the amount of water that they had. They had water up to chest level around the whole city,” Goetz said.

They stayed in the city of Pikeville, which was not heavily impacted by the flooding the way the surrounding communities were, making it a safe place for the group to stay. But Wageman said the group only had to travel 30 minutes to an hour in several directions to see severe flooding.

“The word that just keeps coming to mind is ‘devastating.’ As we were driving through some of these towns, I just kept thinking, ‘I don’t know how people come back from this,’” Wageman said.

But Wageman answered her own question: through leaders like her and students like Goetz. Their group, made up of six adults and 37 teens, was the largest the missions organization had there all summer.

“It just showed how much of a need there is around our country,” Goetz said.

The heartbreaking time in Kentucky was made just a little brighter through hope from Minnesotans.

“It was an experience like nothing we’ve had before and truly, I think, a life-changing experience for these students,” Wageman said.