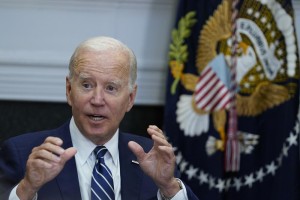 WASHINGTON – With the freeze on student loan payments set to expire soon, President Joe Biden is planning an announcement on Wednesday amid pressure from Democratic lawmakers to forgive more than $10,000 in student loan debt, according to multiple reports.

Payments for federally backed student loans have been suspended since the COVID-19 pandemic began in March 2020. The federal pause has been extended several times, and they’re finally set to resume on Sept. 1 unless the Biden administration decides to once again take action.

The Wall Street Journal and Bloomberg both reported the planned announcement this week.

More than 43 million Americans owe a combined $1.6 trillion in student debt held by the federal government, according to data from the Education Department. That includes more than 7 million borrowers who have defaulted on student loans, meaning they are at least 270 days late on payments.

With inflation at its hottest level in four decades, a shrinking U.S. economy, and climbing interest rates, repaying student loans could become even more challenging for borrowers.

The U.S. government could waive some outstanding student debt, although nothing has been announced yet. The White House is reportedly mulling an executive order that would cancel up to $10,000 of debt per borrower tied to an income threshold, CNN reported Monday, citing sources familiar with the matter.

Last month, top U.S. Education Department officials developed a plan for a mass debt cancellation program, should the department get the green light from Biden, according to Politico.

Under the plan, debt relief would be provided automatically and within several months to millions of borrowers for whom the agency already has income information. Other borrowers would apply through a form on StudentAid.gov, Politico reported, citing internal agency documents obtained by the news outlet.

A closer look at student loan debt in the US

The average federal student loan debt balance is $37,667, while the total average balance — including private loan debt — may be as high as $40,274, according to the Education Data Initiative, a higher education research group that publishes information and resources.

A large majority (92.7%) of all student loans are backed by the federal government, it adds.

On average, a student loan in the U.S. will accrue $26,000 in interest alone over 20 years, according to the Education Data Initiative. The average student borrower takes 20 years to pay off their student loan debt, and some professional graduates take over 45 years to repay their loans.