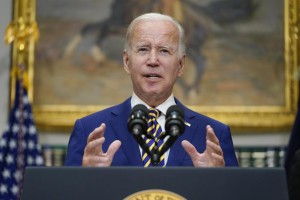 WASHINGTON (AP) — More than 40 million Americans could see their student loan debt reduced — and in many cases eliminated — under the long-awaited forgiveness plan President Joe Biden announced Wednesday, a historic but politically divisive move in the run-up to the midterm elections.

Fulfilling a campaign promise, Biden is erasing $10,000 in federal student loan debt for those with incomes below $125,000 a year, or households that earn less than $250,000. He’s canceling an additional $10,000 for those who received federal Pell Grants to attend college.

It’s seen as an unprecedented attempt to stem the tide of America’s rapidly rising student debt, but it doesn’t address the broader issue — the high cost of college.

Republicans quickly denounced the plan as an insult to Americans who have repaid their debt and to those who didn’t attend college. Critics across the political spectrum also questioned whether Biden has authority for the move, and legal challenges are virtually certain.

Biden also extended a pause on federal student loan payments for what he called the “final time.” The pause is now set to run through the end of the year, with repayments to restart in January.

“Both of these targeted actions are for families who need it the most: working and middle-class people hit especially hard during the pandemic,” Biden said at the White House on Wednesday afternoon.

The cancellation applies to federal student loans used to attend undergraduate and graduate school, along with Parent Plus loans. Current college students qualify if their loans were issued before July 1. For dependent students, their parents’ household income must be below $250,000.

Most people will need to apply for the relief. The Education Department has income data for a small share of borrowers, but the vast majority will need to prove their incomes through an application process. Officials said applications will be available before the end of the year.

Biden’s plan makes 43 million borrowers eligible for some debt forgiveness, with 20 million who could get their debt erased entirely, according to the administration. About 60% of borrowers are recipients of federal Pell Grants, which are reserved for undergraduates with the most significant financial need, meaning more than half can get $20,000 in relief.

Sabrina Cartan, a 29-year-old media strategist in New York City, is expecting her federal debt to get wiped out entirely. When she checked the balance Wednesday, it was $9,940.

Cartan used the loans to attend Tufts University, and with Biden’s plan she will be able to help her parents repay the additional thousands they borrowed for her education. As a first-generation college student, she called it a “leveling moment.”

For Braxton Simpson, Biden’s plan is a great first step, but it’s not enough. The 23-year-old MBA student at North Carolina Central University has more than $40,000 in student loans. As an undergraduate student she took jobs to minimize her debt, but at $10,000 a semester, the costs piled up.

As a Black woman, she felt higher education was a requirement to obtain a more stable financial future, even if that meant taking on large amounts of debt, she said.

“In order for us to get out of a lot of the situations that have been systemically a part of our lives, we have to go to school,” Simpson said. “And so we end up in debt.”

The plan doesn’t apply to future college students, but Biden is proposing a separate rule that would reduce monthly payments on federal student debt.

The proposal would create a new payment plan requiring borrowers to pay no more than 5% of their earnings, down from 10% in similar existing plans. It would forgive any remaining balance after 10 years, down from 20 years now.

It would also raise the floor for repayments, meaning no one earning less than 225% of the federal poverty level would need to make monthly payments.

As a regulation, it would not require congressional approval. But it can take more than a year to finalize.

Biden’s plan comes after more than a year of deliberation, with the president facing strong lobbying from liberals who wanted sweeping debt forgiveness, and from moderates and conservatives who questioned its basic fairness or said it does nothing to fix the debt crisis.

“In my view, the administration should have further targeted the relief, and proposed a way to pay for this plan,” said Sen. Michael Bennet, D-Colo. “While immediate relief to families is important, one-time debt cancellation does not solve the underlying problem.”

Once a popular campaign promise during the presidential primary, the issue created an almost unwinnable situation. Still, many Democrats rallied around it, including support from those who wanted Biden to go beyond $10,000.

“I will keep pushing for more because I think it’s the right thing to do,” said Sen. Elizabeth Warren, D-Mass., who had urged Biden to forgive up to $50,000 a person. “But we need to take a deep breath here and recognize what it means for the president of the United States to touch so many hard-working middle class families so directly.”

Proponents see cancellation as a matter of racial justice. Black students are more likely to take out federal student loans and at higher amounts than their white peers.

The NAACP, which pressed Biden to cancel at least $50,000 per person, said the plan is “one step closer” to lifting the burden of student debt.

Derrick Johnson, the group’s president, urged Biden to cancel the debt quickly and without bureaucratic hurdles for borrowers.

Biden’s decision to impose an income cap goes against objections from some who say adding the detailed application process to verify incomes could deter some borrowers who need help the most.

The Biden administration defended the cap as a gate against wealthier borrowers. Politically, it’s designed to counter arguments from critics who call debt cancellation a handout for the wealthy. Republicans hit hard with that argument on Wednesday despite the cap.

“President Biden’s inflation is crushing working families, and his answer is to give away even more government money to elites with higher salaries,” Senate GOP leader Mitch McConnell said. “Democrats are literally using working Americans’ money to try to buy themselves some enthusiasm from their political base.”

One of the chief political sticking points has been the cost: Biden’s new plan, including debt cancellation, a new repayment plan and the payment freeze, will cost between $400 billion to $600 billion, according to the Committee for a Responsible Federal Budget, a nonprofit that advocates for lower deficits.

Asked about the cost Wednesday, Susan Rice, Biden’s domestic policy adviser, said, “I can’t give you that off the top of my head.”

There are also lingering questions about the administration’s authority to cancel student loan debt. The Justice Department released a legal opinion concluding that the Higher Education Relief Opportunities for Students Act gives the education secretary the “authority to reduce or eliminate the obligation to repay the principal balance of federal student loan debt.”

The legal opinion also concluded that the forgiveness could be applied on a “class-wide” basis in response to the coronavirus pandemic, a national emergency..

Lawsuits are likely nonetheless. The Job Creators Network, which promotes conservative economic policies, said it was considering legal options, with president and CEO Alfredo Ortiz calling the president’s effort “fundamentally unfair” to those who never took out loans for college.

The Associated Press education team receives support from the Carnegie Corporation of New York. The AP is solely responsible for all content.