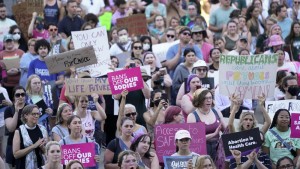 DETROIT (AP) — A judge on Wednesday struck down Michigan’s 1931 anti-abortion law, months after suspending it, the latest development over abortion rights in a state where the issue is being argued in courtrooms and, possibly, at the ballot box.

“A law denying safe, routine medical care not only denies women of their ability to control their bodies and their lives — it denies them of their dignity,” Gleicher of the Court of Claims wrote. “Michigan’s Constitution forbids this violation of due process.”

The decision comes as the Michigan Supreme Court still is considering whether to place a proposed amendment on the Nov. 8 ballot that would add abortion rights to the state constitution. A Friday deadline is looming.

Supporters submitted more than 700,000 signatures, easily clearing the threshold. But a tie vote by the Board of State Canvassers over spacing issues on the petition has kept it off the ballot so far.

In the case handled by Gleicher, the 1931 law makes it a crime to perform abortions unless the life of the mother is in danger.

The judge found the law “compels motherhood” and prevents a woman from determining the “shape of her present and future life.”

The law “forces a pregnant woman to forgo her reproductive choices and to instead serve as ‘an involuntary vessel entitled to no more respect than other forms of collectively owned property,’” Gleicher wrote, quoting constitutional scholar Lawrence Tribe.

She suspended the law in May with an injunction. Her latest decision applies to all state and local prosecutors in Michigan.

The lawsuit was filed by Planned Parenthood. Gleicher declined to pass the case to another judge, despite acknowledging that she has been a regular donor to the organization.