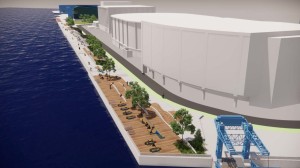 Downsized plans behind the DECC with Harbor Drive

DULUTH, Minn. – The city of Duluth’s dream to transform Harbor Drive behind the DECC into a vehicle-free public plaza is no more. And rising construction costs are being blamed.

The original plan for Harbor Plaza included zero traffic, all land, walking and bike paths, places for food trucks and a large space for entertainment and events. 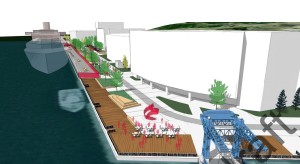 Former plans behind the DECC as a plaza without Harbor Drive

But the city says this grand plan can’t happen because the adjoining seawall reconstruction project is now $7 million over budget due to rising steel costs.

That said, the city says the area will still get a makeover with added public space, including bike and walking paths.

Harbor Drive will remain in place for traffic but will be narrowed from 36 feet wide to 24 feet.

The overall $18.2 million project is part of an effort to attractively accommodate Great Lakes cruise vessels in and out of Duluth.

The final plans are expected to be complete in about a month.

Work on the seawall would be wrapped up sometime next year.

Some additional improvements on the grounds would likely not be finished until 2024.