UPDATE: The identities of the three plane crash victims have been released.

The pilot has been identified as 32-year-old Tyler Fretland from Burnsville.

The two passengers were brother and sister. They have been identified as 32-year-old Alyssa Schmidt from St. Paul and 31-year-old Matthew Schmidt from Burnsville.

HERMANTOWN, Minn. — Three people were confirmed dead Sunday morning after a small plane crashed into a home in Hermantown.

The Hermantown Police Department was notified just before midnight Oct. 1 by the control tower at the Duluth International Airport that a small airplane left radar and was believed to have crashed.

“The control tower advised the last location on radar was 1 to 1.5 miles south of the airport,” according to Joe Wicklund, public information officer for the city of Hermantown. 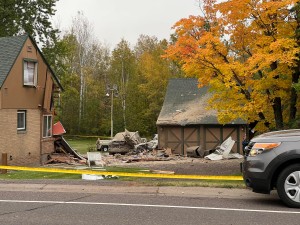 Police and fire departments located the wreckage of a Cessna 172 airplane in the 5100-block of Arrowhead Road.

“In this line of work you just, you’re kind of prepared for the unexpected at all times, but you never expect that that’s going to be the call you receive that night that there was a plane crash,” Jim Crace, Hermantown’s police chief, said.

The airplane hit four power lines and then the second floor of a home before landing in the backyard of the property.

Power was cut off for hours to homeowners in the area.

“The folks inside had to stay inside because there was live wires so we had to have them stay inside for a fair amount of time until we got the power company to cut the lines and we could safely evacuate them,” Crace said.

The two people inside the home 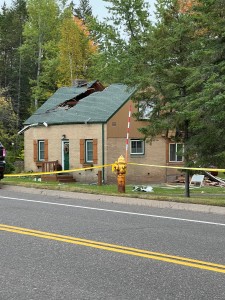 were not injured, according to Wicklund.

“You can see that it literally went right over their head, within a couple feet and they’re safe, a little shaken for sure but at this time they are safe,” Chief Crace said. “And our prayers and thoughts are definitely with the families of the folks that periled in this crash and the folks that are dealing with the aftermath of losing their home and being in total shock.”

But the three people in the plane died — two males from Burnsville and a female from St. Paul. All victims were in their 30s.  Their names were not released as of 8 a.m. Sunday.

The FAA and the National Transportation Safety Board (NTSB) are investigating the crash.

“It’s a crime scene because of the nature of the accident, and they will do the investigation to determine how and where the plane went wrong in the air or what might have happened there, whether it was weather, whether it sight, whether it was mechanical, whether it was human error, and also obviously why it ended up where it ended up,” Wicklund said.

A neighbor who didn’t want to be identified described to FOX 21’s Dan Hanger what she experienced as the plane crashed.

“We were sitting in the house when we heard a loud boom. It wasn’t like a typical crash noise, it was more of an empty sound. We initially thought maybe a boom of thunder. The everything went dark with the power out. It was eerily quiet for a minute or so and before the emergency vehicles started flying down Arrowhead and they just kept coming. We were confused by the sound initially… once we heard the sirens we knew it had to have been something like a crash, but never thought a plane.”