DULUTH, Minn. – A homeless encampment of about a half-dozen people along Railroad Street in Duluth was forced to pack up and leave Tuesday at the direction of the Minnesota Department of Transportation.

The latest development comes exactly two weeks after MnDOT sent crews to the site under 5th Avenue West and I-35 across from Playfront Park to clean up syringes and other health hazards. 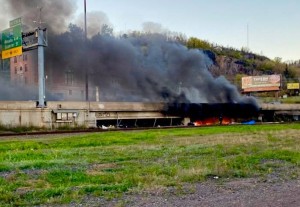 Crews were also seen that day on Sept. 20 installing fencing along the I-35 next to Rail Road Street to keep people from living underneath the highway potentially starting more fires.

On Tuesday, CHUM’s street outreach coordinator, Deb Holman, described what’s next for the homeless who called this section of Duluth home for months.

“This camp has gotten larger through the summer, so MnDOT … will be clearing all sites MnDOT,” Holman said. “We don’t know where anybody is going. The Warming Center is not open yet. They’re just going to move to a different spot, and then we’re dealing with the same thing – either with a complaint from MnDOT again or a complaint from the city.”

“In accordance with MnDOT’s safety procedures, MnDOT determined clearing this right of way was necessary for the health and safety of all. MnDOT makes every effort to provide services and long-term solutions for the people currently residing in the encampments on state right of way and we are currently coordinating with the city and social service providers.” 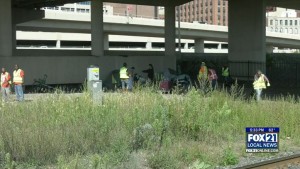 Meanwhile, as homeless advocates and city and county leaders continue to work through ways to safely balance the homeless population within neighborhoods, Holman said the problem is a serious lack of housing in Duluth and the price tag that comes with it.

CHUM and its community partners are in strong need of paid staff and volunteers to help run the city of Duluth’s Warming Center in the Lincoln Park Community Center building, which can house up to around 100 people every night.

The center is expected to open Oct. 15, but that’s only if paid staff and volunteers sign up to help, according to Holman.  She believes a realistic opening is more like Nov. 1.