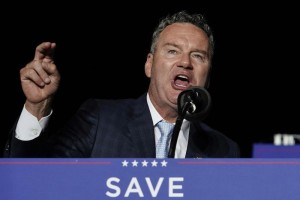 MADISON, Wis. (AP) — Democratic Wisconsin Gov. Tony Evers said Tuesday that he wouldn’t sign a bill creating exceptions for rape and incest if it would keep in place the state’s 1849 abortion ban.

Evers faces Republican Tim Michels, who supported the 1849 ban before changing positions after he won the Republican primary and now says he would sign a bill granting exceptions.

“I wouldn’t sign it because that leaves the underlying law in place which is a ban on abortion,” Evers said in response to a question at a Rotary Club of Milwaukee event co-sponsored by the Milwaukee Press Club and Wispolitics.com.

The Wisconsin Legislature is controlled by Republicans, some of whom have voiced support for granting rape and incest exceptions to the state law that came into play after the U.S. Supreme Court overturned Roe v. Wade. That ruling left it up to states to determine whether abortion should be legal.

In line with Democrats across the country, Evers has tried to make abortion a central issue in the race that polls show is about even. Polls have also shown a wide majority of Wisconsin voters support keeping abortion legal and at the very least having rape and incest exceptions.

Evers has twice called special sessions of the Legislature seeking to repeal the 1849 ban and create a way to put the question before voters. Republicans rejected both proposals. Evers said Tuesday the Wisconsin Legislature should codify Roe v. Wade.

Evers also supports a lawsuit filed by Democratic Attorney General Josh Kaul seeking to overturn the state ban, which passed before women had the right to vote and before the Civil War.

Evers, in his comments before taking questions, repeatedly branded Michels as too “radical” and “dangerous” for the state. He singled out his long-held support of the total abortion ban, a position that Michels changed last month.

“Obviously he supports that and he won’t even support exceptions for rape and incest,” Evers said of a total abortion ban. “To me that’s radical.”

He also cited Michels’ opposition to so-called red flag laws that would allow judges to take guns and other weapons away from people deemed to be a danger, as well as his comments questioning the integrity of the 2020 election. Michels, unlike other Republicans, has not called for President Joe Biden’s victory to be decertified. But Michels, who is endorsed by former President Donald Trump, has said that “maybe” the 2020 election was stolen and he has not unconditionally said if he will accept results of the Nov. 8 election.

Evers, who has vetoed more bills than any other governor in modern Wisconsin history, also touted his roll as a block on the GOP-controlled Legislature. Evers also highlighted his promise to increase funding for local governments, a move that would require approval by the Legislature.

Evers also defended his response to violent protests in Kenosha in 2020 that erupted after a white police officer shot Jacob Blake, a Black man. Michels has been hammering Evers on his response to the violence, saying that he didn’t act quickly enough to quell the violence.

“I did everything I was asked to do and I would do it again if I needed to do it,” Evers said, nothing that he called up the Wisconsin National Guard when it was requested.

Michels has also blamed Evers for paroles of convicted murderers and others granted by the state parole commission. When asked about paroles, Evers deflected criticism by noting that any decision to grant parole is not up to the governor but the commission which operates independently of him. Michels has called on Evers to stop all paroles and pardons.

Michels has been invited to attend a similar event to take questions ahead of the election, but has not responded, said past Milwaukee Press Club President Corri Hess. Kelly did not respond to questions about whether Michels would attend a future event.

Evers and Michels are scheduled to meet for their first and only debate before the election on Friday.