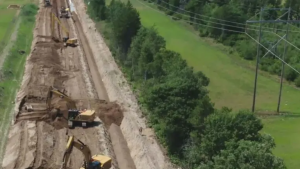 ST. PAUL, Minn. (FOX 9) – The Minnesota Pollution Control Agency, the Department of Natural Resources, and the Fond du Lac Band of Lake Superior Chippewa announced Monday over $11 million in fines, financial assurances, and environmental projects have been levied against Enbridge over spills and breaches caused by their Line 3 pipeline.

The MPCA says it found Enbridge violated a series of regulations such as discharging construction stormwater in wetlands and releasing drilling mud into 12 different locations between June 8, 2021, and Aug. 5, 2021.

“At the start of this project, the MPCA issued our most stringent water quality certification to date and permits that were strong, enforceable, and protective — and this enforcement action holds Enbridge accountable for the violations that occurred during construction,” MPCA Commissioner Katrina Kessler said in the press release. “We are committed to protecting Minnesota’s wetlands and streams and will continue to monitor the company’s ongoing work to return the site to its pre-construction condition.”

Enbridge’s Line pipeline became operational in November 2021. The MPCA permits remain in place as Enbridge works to restore all the construction sites along the line to their pre-construction condition.

Here’s a breakdown of the fines, according to the MPCA:

Separately, the DNR and Enbridge reached an agreement for two other aquifer breaches, one near Enbridge’s Clearbrook Terminal and the other near the LaSalle Creek Crossing. This builds on previous enforcement action taken in 2021, which included $20,000 in penalties, $590,000 for mitigation and monitoring, and $2.75 million in escrow as financial assurance for fen wetlands mitigation and restoration – if needed. The new agreement includes $165,400 in additional groundwater mitigation funds for the Clearbrook location.

For the LaSalle Creek site, the new agreement includes: