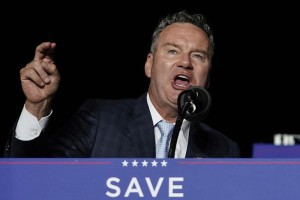 MADISON, Wis. (AP) — The Republican running for governor in Wisconsin suggested Tuesday that he did not support enforcing the swing state’s near-total ban on abortions, saying “I will never arrest a doctor” before his campaign walked back his comment.

Michels’ spokesperson Anna Kelly attempted to clarify his comment, saying it was the district attorneys, not the governor, who enforce laws.

“He’s not a DA or beat cop arresting anyone,” she said.

“He’s either lying to voters today, in a desperate attempt to hide his radical positions, or he was lying to them for the last six months,” Roecker said.

Democratic district attorneys in the state’s two largest counties where abortions had been performed before the Supreme Court overturned Roe v. Wade have said they won’t enforce the state’s ban, which was enacted before women had the right to vote and before the Civil War.

Abortion has seeped into all of the top races in Wisconsin this election cycle.

Tim Michels is locked in a tight race with Democratic Gov. Tony Evers and abortion has been a major issue. Michels, who is endorsed by former President Donald Trump, said in the Republican primary that he backed a state law dating to 1849 that makes it a felony for doctors to perform nearly all abortions.

But last month Michels had changed course and said he would sign a bill granting exceptions in cases of rape and incest. He repeated that position Tuesday during a Q&A at the Rotary Club of Milwaukee, but went a step further.

“I will never arrest a doctor, as they’re saying,” Michels said. “I’m a reasonable guy.”

Under Wisconsin’s abortion ban, doctors who perform abortions can be found guilty of a class H felony, punishable by up to six years in prison, a fine of up to $10,000, or both. The governor is not responsible for enforcing the law, but Michels’ comment suggested he did not support anyone arresting a doctor who would violate it.

That is not currently allowed under state law unless a district attorney asks for assistance. Kaul has said he would not enforce the abortion ban.

Evers and his allies have been spending tens of millions of dollars on television advertising to hammer Michels on his previous support for the 1849 law, which he called the “exact mirror” of his position. Evers is challenging the law in court and has twice called special sessions of the Legislature seeking to repeal the ban and create a way to put the question before voters. Republicans rejected both proposals.

Democrats are trying to make the governor’s race a referendum on abortion, pointing to public polls that show broad bipartisan support for legal abortions and at the very least exceptions for rape and incest.

Michels said Tuesday that the attacks against him on abortion are “just not sticking.”

Evers said he would not sign a bill granting abortion exceptions for rape and incest if it leaves the underlying abortion ban in place. Evers also said he would grant clemency to any doctor who is convicted under the law and sentenced to prison.

While Democrats have tried to make the race about abortion, Michels has focused on crime. He promised Tuesday to reduce crime statewide and in Milwaukee, promising “life will be better for everybody.”

Michels also promised to have “massive” tax reform, including lowering the income tax to a nearly flat rate for all filers of around 5%.

Michels said after the event, in response to a question from a reporter, that he would “certainly” accept the results of the November election after previously not committing fully to that. He also promised to sign a number of bills Evers vetoed that Republican supporters said were designed to make elections more secure. A number of the measures made it more difficult to vote absentee.

Michels also suggested that he would be open to breaking up the state Department of Natural Resources into two agencies, one to deal with hunters and the other focused on business regulations.