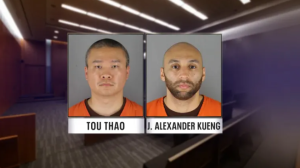 MINNEAPOLIS (FOX 9) – One of the final two former Minneapolis police officers facing state charges in the murder of George Floyd has pleaded guilty.

In exchange for his guilty plea, Kueng’s charge of aiding and abetting second-degree murder will be dropped. He is expected to be sentenced to 42 months (3.5 years) in prison for aiding and abetting manslaughter, which will run concurrently with his federal sentence. He is already serving three years in federal prison for violating Floyd’s civil rights. A sentencing date hasn’t yet been scheduled.

Meanwhile, Thao on Monday agreed to a stipulated evidence trial, so there won’t be jury selection. Judge Peter Cahill will rule on the second count of the case – aiding and abetting manslaughter – from the bench based on evidence the prosecution and defense agree on.

If Thao is found guilty, the state agrees to drop the aiding and abetting murder count and Thao will be sentenced within the state guideline range, which is 41-57 months. Thao was sentenced to 42 months in federal prison.

In the infamous video showing Floyd’s killing, Thao was shown holding back members of the crowd who had gathered as police held down Floyd. Kueng was shown kneeling on Floyd’s midsection and lower body as Derek Chauvin kneeled on his neck.

Thao and Kueng both previously rejected plea offers this past summer in the case. Both men have also already been convicted on federal charges of depriving Floyd of his civil rights. Thao and Kueng were both offed 36-month sentences to run concurrently with their federal sentence but opted to go to trial instead. Thao was sentenced to 3 ½ years (42 months) in federal prison while Kueng got three years in federal prison. Thao and Kueng said they would appeal their federal sentences.

Chauvin was convicted in April 2021 on murder charges for Floyd’s killing. He was sentenced to 22 ½ years in prison for the killing. He also pled guilty to federal charges before the trial in January. Thomas Lane, the fourth and final officer involved in the killing, was convicted of federal charges and pled guilty to state charges. He received a three-year sentence on the state charges.