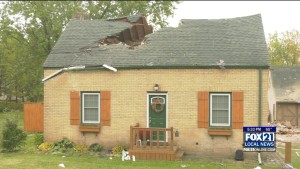 (FOX 9) – The National Transportation Safety Board (NTSB) released its initial report of the events that led up to a plane crashing into a home that killed three people in northern Minnesota.

The report was released sometime this week and offers insight into what happened during the fight but does not provide a cause for why the plane crashed into a home in Hermantown. The investigation is still ongoing.

On Oct. 1, a small plane with three people arrived at the Duluth International Airport from the Twin Cities to attend a wedding. About 12 hours later, the pilot, 32-year-old Tyler Fretland, and two passengers, 32-year-old Alyssa Schmidt and 31-year-old Matthew Schmidt, headed back to the airplane.

The pilot was issued a departure frequency and beacon code, but the pilot read back the frequency incorrectly, and the air traffic controller did not correct it, according to the report.

The flight took off at 11:12 p.m. and climbed to 1,750 feet about one mile south of the runway. The airplane entered a “tight teardrop turn” while climbing to 2,000 feet, turned again until it was on track at about 2,800 feet, then started to descend.

The air traffic controller attempted to contact the pilot but did not get a response. He tried again, and the pilot responded, “contacting departure two tango alpha,” the report reads.

The airplane continued to descend, and the controller asked the pilot to confirm that he was in fact climbing, but there was no response from the pilot.

The airplane then struck the roof of a two-story home and passed through two upstairs bedrooms before coming to a stop between a vehicle and a detached garage.

All three individuals in the plane died. Amazingly, no one in the home was injured – even though residents were sleeping just feet away from the impact.  The report states all major components of the airplane were found within the area. There was no post-crash fire and no visible fuel at the scene.

The report states mechanical parts of the airplane examined post-crash seemed to be operating normally. The pilot did not request any fueling or maintenance for the aircraft before leaving the Duluth airport.

A final report will be released when the investigation concludes which normally takes months.