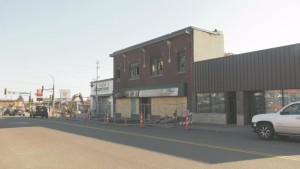 DULUTH, Minn. — Four buildings in Downtown Duluth have been targeted to be a future redevelopment site, including one damaged by a fire last month.

The Duluth Economic Development Authority passed a resolution this week to declare the buildings on the 500 block of East Fourth Street, “Structurally Substandard.”

That includes Lake Superior Medical Equipment, which had a fire inside it back on September 24, along with Uncle Loui’s Cafe, the Daugherty building, and the former Dunbar Floral and Gifts.

The Duluth News Tribune reports Authority Chairman Chris Fleege says this action allows them to keep options available to help pay for future projects. Currently, none are scheduled to take place in the near future.

The DEDA says an analysis found the cost to rebuild and repair the buildings would be over $2.2 million.