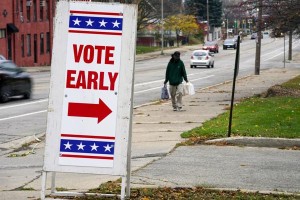 MADISON, Wis. (AP) — A Wisconsin appeals court is refusing to block a lower court’s ruling banning the practice known as ballot spoiling, which allows voters who already submitted an absentee ballot to void it and vote again.

The 2nd District Court of Appeals decided Thursday against hearing an appeal of a Waukesha County circuit court judge’s ruling this month in favor of a conservative group founded by prominent Republicans. The bipartisan Wisconsin Elections Commission scheduled an emergency meeting for Friday afternoon to react to the ruling, which comes less than two weeks before the Nov. 8 election.

Wisconsin voters have been submitting absentee ballots by mail for weeks and in person since Monday. As of Friday, more than 490,000 ballots had been cast either by mail or in person, according to the elections commission.

Democratic Gov. Tony Evers and Republican U.S. Sen. Ron Johnson are both on the ballot in tight races. Johnson’s race could determine which party has majority control of the Senate and the next governor will be in position to either enact or reject bills passed by the Republican-controlled Legislature heading into the 2024 presidential election.

The appeals court on Oct. 10 agreed to put the lower court’s ruling on hold while it decided whether to hear the appeal from the elections commission, the Democratic National Committee and Rise, Inc., a group that works to get college students to vote.

“The court’s order does not change what is on the ballot. Nor does it prevent a single voter—Democrat, Republican, or otherwise—from casting a ballot in the upcoming election,” the appeals court said. “Thus, claims of confusion and disenfranchisement ring hollow.”

The appeals court’s ruling lifted that hold as of 3 p.m. on Friday. The elections commission was meeting at 12:30 p.m.

The order from Waukesha County Circuit Judge Brad Schimel, a former Republican attorney general, required the elections commission to inform municipal clerks and local election officials that its guidance on ballot spoiling issued Aug. 1 had been withdrawn. Schimel also forbid the commission from issuing any future guidance related to ballot spoiling that is not allowed under the law.

Restoring Integrity and Trust in Elections filed the lawsuit last month. The group was created in July by former U.S. Attorney General William Barr, longtime Republican strategist Karl Rove, GOP donor Steve Wynn and others. It has also filed election-related lawsuits in the battleground states of Arizona and Pennsylvania.

Ballot spoiling got more attention in Wisconsin during the August primary after a Republican candidate for governor and three top Democratic candidates for U.S. Senate dropped out of the races, but their names were still on the ballots. The elections commission made clear then that voters who had cast their ballots for one of them absentee could spoil it and vote again for someone still in the race.

RITE argued that the practice in Wisconsin is both against the law and creates additional opportunities for fraud and confusion. The appeals court noted that state law does allow for a clerk to issue a new ballot if a voter returns a “spoiled or damaged absentee ballot.” But the law does not appear to authorize a clerk to spoil a ballot that’s already been cast and issue a new one, the appeals court said.

The elections commission did not immediately provide numbers of how many ballots were spoiled by voters in recent elections.