House In Carlton County A Total Loss After Fire, No Injuries Reported 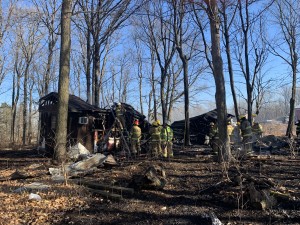 SILVERBROOK TOWNSHIP, Minn. — A house and its contents were declared a total loss after a fire happened Monday morning.

The Carlton County Sheriff’s Office says they responded to a structure fire in the 1100 block of Gault Road in Silverbrook Township around 9 a.m.

The homeowner had called from outside their house after seeing smoke coming from it.

There were no injuries reported, however paramedics arrived to be safe. The Sheriff’s Office says the cause of the fire is unknown and does not appear to be suspicious.

The Wrenshall Fire Department was assisted by the Carlton, Esko, and Blackhoof Fire Departments. Red Cross is helping the homeowner with anything they need.

The fire is being investigated by the State Fire Marshall’s Office and the Carlton County Sheriff’s Office.