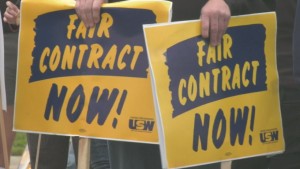 Union members on the Iron Range who work for Keetac were protesting for a new contract last month.

The new tentative contract set to last 4 years and covers about 13,000 workers who are a part of the 13 unions.

Details on the contract are limited, but one representative said it includes bonuses, higher wages and bolstered pensions.

The new deal also comes with improvements to the working conditions, an additional holiday covered and better health insurance coverage for employees and retirees.