The resignation became effective at 8 a.m. Tuesday, and it comes after a police investigation involving Bender’s communication with a woman through Facebook messenger.

In his resignation letter, Warren Bender, a city councilor since 2008, said he’s been suffering from “medical problems, both physical and mental” for the past several years.

He goes on to say his resignation will allow him to “…seek the help I so desperately need.” 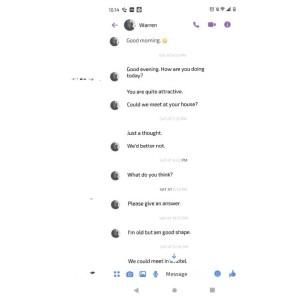 One of the screenshots included in the police report

He then issues an apology by saying:

“…to those who have been negatively affected by my inadvertent actions, I accept responsibility and I empathetically apologize. Again, I will be seeking the proper help that I need in a sincere effort to remain a respected and proactive citizens of Superior…”

As for the police investigation, it was launched in October after Mayor Jim Paine was contacted by a woman who said Bender was repeatedly messaging and calling her through Facebook messenger, that she didn’t know bender personally and that she wanted the messages to stop.

At least two other councilors were also aware of the messages.
Screenshots of the conversation included in the police reports show messages saying:

“You are quite attractive. Could we meet at your house?”

“I really want you.”

And, “I pray for us. If you’re not interested let me know please.”

“Over the past month, I have given the Superior Police Department all of the information I have about Mr. Bender’s recent actions. At the conclusion of their investigation, I spoke with Mr. Bender. While not all of the facts are clear, I urged him to consider the best interests of the city and his constituents. I then requested and received his resignation from the City Council.”

Superior Police Chief Nicholas Alexander told FOX 21’s Dan Hanger that no charges have been filed against Bender.  He said the woman did not want to go on the record with a formal report. She simply wanted the behavior to stop.