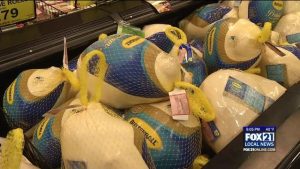 (Fox 9) CANNON FALLS, Minn. – The countdown is on until Turkey Day, and families hosting Thanksgiving can expect to pay more for their dinner this year.

Turkey prices are actually lower now than last week and that could continue if retailers offer deals leading up to Thanksgiving. But compared to previous years, this will be a pricey Thanksgiving.

Inflation will be on the menu this Thanksgiving dinner as turkey farmers, like everyone else, are feeling its effects.

“It’s a lot more expensive time to grow a turkey than it was a year ago. Turkey feed is a lot more expensive, gas to heat barns or to move trucks around – all of those costs have risen, so we have increased our turkey costs just a little bit this year,” said John Peterson, third-generation farmer and owner of Ferndale Market.

Ferndale Market, a third-generation farm in Cannon Falls, has tried to absorb a lot of those increases, but that can be difficult when almost everything costs more.

“Thanksgiving dinners are most likely going to be … much more expensive this year compared to last year,” said Metin Cakir, an associate professor in the Department of Applied Economics at the University of Minnesota.

Experts attribute the price increases to a host of factors, including inflation across all food categories and the Avian flu wiping out millions of birds this year.

“Right now, the most recent report shows this week’s average turkey prices for whole frozen turkey and the fresh turkey is about 10 percent higher than what we observed last year, but it is lower than last week’s prices,” Cakir said.

This time of year makes up about a third of Ferndale Market’s sales. Customers have been ordering turkeys since mid-October and they’ll start picking them up this weekend during Turkey Fest.

“We still have both fresh and frozen turkeys available,” Peterson said.

While inventory is looking good, certain sizes may be limited as gatherings have changed in recent years.

“During the pandemic, people gravitated toward much smaller turkeys for smaller gatherings, and this year, we really see that pulling back to much bigger sizes. So from where we sit, it looks like folks that are going to have bigger family gatherings again this thanksgiving and we’ve seen stronger demand for larger size birds than we have in the past couple of years,” Peterson said.

The Minnesota Turkey Growers Association said there will be plenty of turkey for all Thanksgiving tables, but if customers want a specific turkey product, they should order it as soon as possible. The association also said frozen turkey tastes as good as fresh.