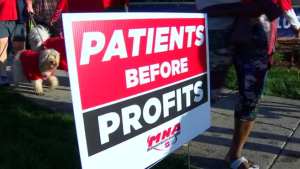 (FOX 9) – A little more than two months ago an estimated 15,000 nurses walked off the job after failing to reach an agreement with hospital executives over staffing and wages.

On Thursday, the Minnesota Nurses Association (MNA) declared its intent to hold a vote on Nov. 30 to do it again.

“We have been at the bargaining table for eight long months,” said Mary C. Turner, president of the MNA, at a Thursday press conference to announce the vote. “We have begun to lose faith in the bargaining process… Our hospital leadership has failed us.”

Nurses with the MNA at 15 hospitals across seven different hospital systems in the Twin Cities, Duluth and Superior, Wisconsin, previously went on strike in September. The strike was believed to be the largest private-sector nurses’ strike in U.S. history, according to the union.

Negotiations initially began in March of 2022. According to Turner, the MNA has been at the bargaining table 28 times since then, including nine meetings following the last strike.

Why did nurses strike?

MNA has said it is “fighting for fair contracts to improve patient care and working conditions at the bedside.” When nurses announced they planned to strike in September, Turner said they felt “overworked and underappreciated,” and they’re watching their colleagues leave the bedside in droves.

“Nurses do not take this decision lightly, but we are determined to take a stand at the bargaining table, and on the sidewalk if necessary, to put ‘patients before profits’ in our hospitals,” Turner had said prior to the three days of picketing.

The nurses’ union has been asking for a solution to short staffing and retention issues, and an annual salary increase of more than 4 percent.

“Everyone in Minnesota talks about the importance of health care. Our nurses cannot continue being understaffed,” said Bernie Burnham, president of Minnesota AFL-CIO, in September. “Patients deserve to be treated in a timely manner with dignity and respect.”

This is a developing story. Check back for updates.