(FOX 21) –  An estimated 200 anglers became stuck on a broken chunk of ice Monday, according to the Beltrami County Sheriff’s Office. 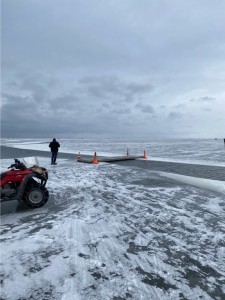 The incident was reported around 11:30 a.m. on Upper Red Lake.

The sheriff’s office originally reported about 100 people stranded, but officials updated that number to 200 after all were off the ice.

Kelliher Fire and Rescue responded to the scene, along with the sheriff’s office.

A temporary ice bridge was constructed to help get people across the open water, according to authorities.

At 2:37 p.m., sheriff’s officials reported all stuck on the ice had gotten off safely.

“The Beltrami County Sheriff’s Office reminds those who are thinking of heading on the ice that early season ice is very
unpredictable. Extreme caution should be used when heading on the ice and to check the thickness frequently to
ensure an adequate amount of ice.”

For more on the initial rescue efforts, click here for a Facebook Live video from Shane Youngbauer, owner of Northwoods Fish Houses on Upper Red Lake.  Youngbauer said the ice on the lake was roughly 7 inches Monday, which is enough ice for anglers to walk on, according to the Minnesota DNR. 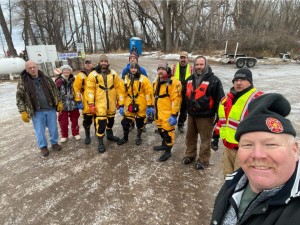