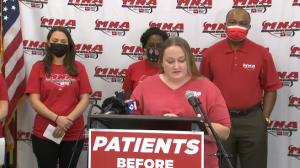 ST. PAUL, Minn. (FOX 9) – Thousands of Minnesota nurses are set to go on strike again after union members overwhelmingly voted in favor of authorizing a strike over unfair labor practices.

The 15,000 members of the union have been working without a contract since the end of May and now, for the second time this year, members of the Minnesota Nurses Association are prepared to walk off the job later this month.

The union announced the results from Wednesday’s strike vote overnight. During a news conference Thursday, the union said if a deal cannot be reached, nurses at 16 hospitals in Minnesota plan to begin their unfair labor practices strike at 7 a.m. on Dec. 11.

Nurses at Twin Cities hospitals and Essentia Health (see list below) plan to strike through 7 a.m. on Saturday, Dec. 31. However, nurses at St. Luke’s in Duluth and at Lake View in Two Harbors have chosen to strike with no predetermined end date.

After eight months of negotiating with hospital executives, union leaders say it’s time to show their employers just how serious they are.

“Because I know where our power lies. And the only power we have is 15,000 nurses standing together for our patients. That’s the only power that we have as workers. So I have my hopes, but I am not one to assume,” said Mary Turner president of the Minnesota Nurses Association.

When nurses walked off the job in September, it was a three-day strike with an end date in sight.

Nurses at the following hospitals plan to go on strike if a deal isn’t reached: