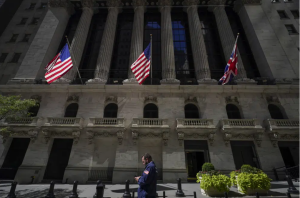 NEW YORK (AP) — Stocks fell in morning trading on Wall Street Monday and bond yields rose as investors face a mostly quiet week that will be capped by a closely watched update on inflation.

Investors are weighing several international developments that could further unsettle a global economy that is already getting burned by stubbornly hot inflation.

China is lifting some of its most severe COVID-19 restrictions following protests across major cities. That has raised hopes that disruptions to manufacturing and trade will ease.

Markets in Asia rose, while markets in Europe were mixed.

Inflation, rising interest rates and the potential for recessions throughout global economies are among the biggest concerns for investors. Wall Street has been closely watching corporate announcements and government reports to get a better sense of just how much damage is being done to the economy and inflation’s path ahead in 2023.

V.F. Corp., which makes Vans shoes and The North Face outdoor gear, fell 8.2% after warning investors that weak demand is crimping revenue. The company also announced the departure of its CEO.

Tesla fell 5.1% following reports that it may have to cut production in China because of weak demand.

Investors are dealing with several crosscurrents of information. Demand may be weakening in some areas of the economy, but some sectors remain resilient.

The services sector, which makes up the biggest part of the U.S. economy, showed surprising growth in November, according to the Institute for Supply Management. Employment remains a strong area of the economy as does overall consumer spending.

Wall Street will get a weekly update on unemployment on Thursday. Investors will likely be more focused on the monthly report on consumer prices, for November, from the government on Friday.

Elaine Kurtenbach and Matt Ott contributed to this report.