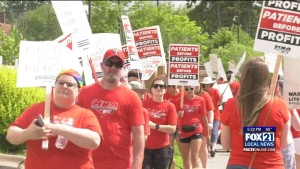 DULUTH, Minn. — St. Luke’s and Essentia Health announced that a tentative contract agreement was reached between the hospitals and its nurses with the Minnesota Nurses Association ahead of a planned strike Dec. 11.

“We are pleased to announce that St. Luke’s and MNA reached a tentative contract agreement. MNA has withdrawn its strike notice and will bring the contract to nurses for ratification in the near future. We want to thank all who have worked so diligently at the table to reach a fair and equitable contract,”

Details of the tentative agreement were not provided by St. Luke’s Monday night.

MNA announced on Dec. 1 that the planned strike at St. Luke’s would not have an end date, unlike the three-day strike in September that included a historic 15,000 nurses across Minnesota.

Tuesday morning, Essentia Health announced they have also reached a tentative agreement between the hospital and MNA nurses.

As part of their agreement there will be a 3-year contract covering 1,300 nurses at the Duluth and Superior Essentia hospitals. They will withdraw their strike vote as well which was supposed to be for 20-days starting December 11.

The MNA says they will share details of their tentative agreement with its membership and conduct a ratification vote by Dec. 12. The MNA bargaining committee unanimously agreed to recommend ratification, according to a press release.

Below is the latest statement from Essentia:

“At Essentia, we are privileged to have skilled, compassionate nurses, and we value their contributions to make a healthy difference in people’s lives. Thanks go to all our colleagues for the teamwork demonstrated as we have been preparing for a potential work stoppage. We appreciate the efforts of the negotiating teams to reach a resolution, allowing us all to continue focusing on providing high-quality patient care to the communities we are privileged to serve.”

Meanwhile, nurses at Lake View Medical Clinic in Two Harbors, which is operated by St. Luke’s, continue negotiations. A statement was released by St. Luke’s Tuesday morning that says:

“Lake View and our hospital staff nurses represented by the MNA have completed two mutually agreed upon negotiation sessions after the previous collective bargaining agreement expired on September 30, 2022.  We have multiple bargaining sessions scheduled in December, with the next session set for Friday, December 9.”

“Lake View will continue our strong tradition of working collaboratively with the MNA to reach an agreement that is fair to all of our stakeholders, including our patients, community, and our entire Lake View team.”

Nurses in the Duluth area have been working without a contract since June 30.