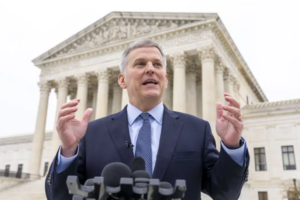 WASHINGTON (AP) — The Supreme Court on Wednesday seemed skeptical of making a broad ruling that would leave state legislatures virtually unchecked in making rules for congressional and presidential elections.

In nearly three hours of arguments, liberal and conservative justices appeared to take issue with the main thrust of a challenge asking them to essentially eliminate the power of state courts to strike down legislature-drawn, gerrymandered congressional district maps on grounds that they violate state constitutions.

But it was harder to see exactly where the court would land. In particular, a trio of conservative justices who probably control the outcome, Chief Justice John Roberts and Justices Brett Kavanaugh and Amy Coney Barrett, seemed open to simply limiting state court power in some circumstances.

Republicans from North Carolina who brought the case to the high court argue that a provision of the U.S. Constitution known as the elections clause gives state lawmakers virtually total control over the “times, places and manner” of congressional elections, including redistricting. That means cutting state courts out of the process, they say.

The Republicans are advancing a concept called the “independent legislature theory,” never adopted by the Supreme Court but cited approvingly by four conservative justices.

A broad ruling could threaten hundreds of election laws, require separate rules for federal and state elections on the same ballot and lead to new efforts to redraw congressional districts to maximize partisan advantage.

“This is a theory with big consequences,” Justice Elena Kagan said, that would allow for the “most extreme forms of gerrymandering from legislatures.” The other liberal justices, Sonia Sotomayor and Ketanji Brown Jackson, also appeared favorable to the role of state courts in the process.

And Barrett said the outcome sought by North Carolina Republicans would leave judges with “difficult lines to draw.”

Yet Barrett also asked questions suggesting that she believes state courts could go too far in trying to police federal elections in a way that could violate the U.S. Constitution.

The court’s decision in the North Carolina case also might suggest how the justices would deal with another part of the Constitution — not at issue in the current case — that gives legislatures the authority to decide how presidential electors are appointed. That provision, the electors clause, was central to efforts to try to overturn the outcome of the 2020 presidential election in several closely contested states.

The North Carolina state Supreme Court struck down districts drawn by Republicans who control the legislature because they heavily favored Republicans in the highly competitive state. The court-drawn map used in last month’s elections for Congress produced a 7-7 split between Democrats and Republicans.

North Carolina is among six states in recent years in which state courts have ruled that overly partisan redistricting for Congress violated their state constitutions. The others are Florida, Maryland, New York, Ohio and Pennsylvania.

State courts have become the only legal forum for challenging partisan congressional maps since the Supreme Court ruled in 2019 that those lawsuits cannot be brought in federal court.

Roberts, writing then for the court and joined by four other conservative justices, noted that state courts remained able to act.

“Provisions in state statutes and state constitutions can provide standards and guidance for state courts to apply,” Roberts wrote, in an opinion joined by Justices Samuel Alito, Neil Gorsuch, Clarence Thomas and Kavanaugh.

“Do you think that it furthers democracy to transfer the political controversy about districting from the legislatures to the elected supreme courts where candidates are permitted to campaign on the issue of districting?” he asked.

Gorsuch said that preserving the North Carolina court ruling might be politically popular because it was aimed at combating partisan line-drawing, but that the same logic might have led in earlier eras to upholding politically odious positions enshrined in state constitutions, including counting enslaved Black people as three-fifths of a person under Virginia’s constitution.

“The political saliency point depends on whose ox is being gored at a particular point in time,” Gorsuch said.

Donald Verrilli, representing North Carolina in defense of its court ruling, said the Supreme Court should not ignore what he described as rising opposition to partisan gerrymandering.

“It’s more than whose ox is being gored. This is a very important issue in this country,” said Verrilli, who previously served as the Obama administration’s top Supreme Court lawyer.

Kavanaugh has separately written about a need for federal courts to police the actions of state courts when it comes to federal elections, citing an opinion by three conservatives in the Bush v. Gore case that settled the 2000 presidential election. Thomas was one of the three justices on that 22-year-old opinion, but the court decided the case on other grounds.

In North Carolina, Republican lawmakers won’t have to wait for the high court’s decision in Washington to produce a new congressional map that is expected to have more Republican districts.

Even as Democrats won half the state’s 14 congressional seats, Republicans seized control of the state Supreme Court. Two newly elected Republican justices give them a 5-2 edge that makes it more likely the state court would uphold a map with more Republican districts.

Follow the AP’s coverage of the U.S. Supreme Court at https://apnews.com/hub/us-supreme-court.