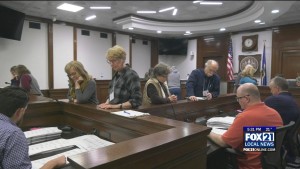 DULUTH, Minn. — Ballot recounts for northern Minnesota’s House districts 3A and 3B are complete, with unofficial results remaining the same — give or take a vote or two, according to David Zoll, attorney for the DFL party.

The official results will need to be signed off by the State Canvassing Board later this month.

Zoll told FOX 21 Wednesday that all results through election machines came back accurate after the recounts.

He said the only results off by a vote or two involved five precincts that were originally counted by humans — not machines.

In Dist. 3A, Republican Roger Skraba won by less than 20 votes over DFL incumbent Robert Ecklund.

In Dist. 3B, Republican Natalie Zeleznikar took the win by less than 40 votes over DFL incumbent Mary Murphy who has held her seat since 1976.

Murphy released a statement to the media Wednesday about the recount results.  She said in part:

“I’m grateful to have had the opportunity to wake up every morning to ask myself what I can do for my community and my constituents- and to deliver for them. Having this awesome responsibility is one I’ve never taken for granted. I have faith in our free and fair elections system, and thank all the election workers for their unwavering commitment to accessible democracy.”