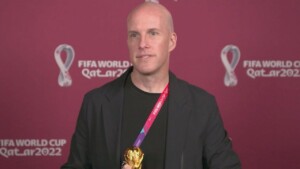 LUSAIL, Qatar (AP) – Grant Wahl, an American journalist who helped grow the popularity of soccer in the U.S. and reported on some of the biggest stories in the sport, dies while covering a World Cup match between Argentina and the Netherlands. He was 49.

The organizing committee said Wahl received immediate emergency medical treatment on site, which continued as he was transferred by ambulance to Hamad General Hospital. Wahl was covering his eighth World Cup.

He wrote Monday that he had visited a medical clinic while in Qatar and was given antibiotics and cough syrup for a possible case of bronchitis.