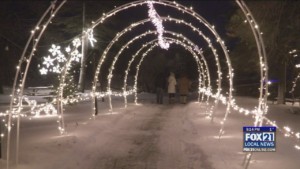 DULUTH, Minn. — Marcia Hales famous Spirit of the Lights display is in need of a new home, as Glensheen has decided to no longer have the lights be a part of the holiday experience for years to come.

Glensheen has hosted the holiday light display since 2019, after transporting the lights from owner Marcia Hales, who for 20 years would invite the public to enjoy the light at her residence on Park Point.

Glensheen staff tell us the outdoor display added to the guest experience during the holiday seasons in the past years.

Their biggest reason to stop showing the display is due to the estate’s limited electrical infrastructure and lack of resources available to maintain the exhibit.

If you haven’t made it out to Glensheen to see Marcia’s waterfront display, there’s still time to see them as they’ll be on display on Glensheen’s grounds until December 31.

A statement from Glensheen is below:

“As part of the process, it was decided that this would be the final year of Marcia’s Spirit of the Lights. We discussed this with Marcia before this year’s launch. While we hope to maintain an outdoor experience this time of the year, future plans will take into consideration the limitations of our electrical infrastructure across the estate and resources to maintain the display on our beautiful but sometimes brutal Lake Superior shoreline.”

Fox 21 reached out directly to Marcia herself and she was able to confirm that her display needs a new home for future holiday seasons. She did say that she’s hoping to nail down a location for her lights by this spring.

While she couldn’t announce who might be the new host of the display, she did confirm that Bentleyville is not an option.