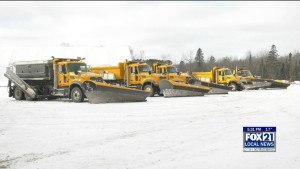 Skoog said the only change in the offer over the weekend by email was a 25-cent-an-hour special-use allowance, which adds up to roughly $500.  But Skoog said that only includes 3/4 of the 170 members of the Public Works Department.

Here are the three main areas the union continues to be concerned about:

The union wants a four percent raise each year for the next three, compared to the three percent pay increase offered by the county.

The union wants $500 payments each year, while the county wants a one-time payment of $400.

And finally, the union says it’s being offered $150 each year for cold-weather gear when they are requested $500 each year.

Skoog did not say Monday night when the union would file the petition of intent to strike with the state, which then initiates a 10-day cooling off period before a strike date is set.

St. Louis County released the following statement Monday night after the Teamsters union voted to go ahead with an intent to strike.

We are disappointed and discouraged to hear the outcome of the vote by members of Teamsters Local 320, who have rejected our contract proposal as part of labor negotiations for contracts effective January 2023.

For the last couple weeks, we’ve listened as concerns were expressed about safety issues – in particular cold weather gear.  Over the weekend, we addressed those concerns by modifying our Final Offer For Settlement and presenting them with the County’s Last Best Final Offer.

·         Added over the weekend – a 25 cents/hour private use allowance for the 130 employees who don’t already have one. This is the equivalent of approximately $500/year and is unique to the Teamsters bargaining unit, and more than covers the difference in safety equipment costs the union had asked for at the last mediation session. (For the approximately 40 employees already receiving a private use allowance, the parties earlier in negotiations had reached tentative agreement to increase the amount to 50 cents/hour.)

All this is in addition to a wage proposal that includes a 3.0% general wage increase in each of the three years of the contract (2023 to 2025). Employees also would be eligible for step increases ranging up to 3.88% each year of the contract, and a one-time $400 cash payment if the contract is ratified by December 31. This is consistent with the agreements that have been reached with and ratified by other County bargaining units to date representing more than half of the total County workforce.

We anticipate the Bureau of Mediation Services will be reaching out to both sides regarding next steps. Employees’ current contract remains in effect through the remainder of the year.